The stray dog problem is huge in Kosovo and the animals are suffering of diverse contagious sicknesses like rabies, worms or leishmaniose. Therefore our Foundation treated since 2015 all animals in the Southwest and sterilises them, so that they do not reproduce. We are convinced, that CNVR is in the actual stray dog situation the best method to stop the increase of the dog population, if it is done together with education and registration of dog owners.

2017 the Food & Veterinary Agency of Kosovo changed thanks to our intervention with an US Human Rights officer their proposed kill-regulation to a CNVR regulation for whole Kosovo - which is a great step. In the meantime applying veterinarians got the contracts - in the whole 7 regions with two veterinary clinics and their staff. On 28 May 2018 finally the CNVR program started - and turned out to be very bad! Many dogs had to be rescued after surgery with open wounds - other died. The vets got paid disregarding their qualification.

Also our proposals for registration of dog owners and chipping of their dogs failed continually over years. In 2021 the law for controlled dog ownership through chipping dogs and registration of owners was in force. But no program did start yet.

Kosovo is the poorest country on the whole European continent. After the war, where men and animals were killed, only few stray dogs were found. Since 2008 the amount has increased incredibly, because Kosovo does not know any dog owner responsibility.

From Peja to Decan, Gjakova, Malishevo, Mamusha and Rahovec we started with CNVR, but in all other municipalities are no programs going on, except killing from time to time. A new regulation from Food & Veterinary Agency might stop this practice in 2019, when dog owner control should be implemented...but the Agency missed to work on this topic ...and all animal lovers have to wait for better times.

Our Foundation started to build pet clinics with Sanctuaries in Vushtrri, Gjakova, Drenas, and renting a clinic in Mitrovica. Our partner veterinarians work continually on CNVR programs.

On 27th December 2017 the former parliament consented to a budget of totally 1.3 Mio. Euro in the next 3 years for sterilising street dogs. This sum was badly used by the Food & Veterinary Agency of Kosovo (AVUK). Nepotism ruled decisions. Surgeries were done unprofessional, dogs died in the street after bad treatment, some veterinarians cheated...but the responsible former CEO Valdet Gjinovci and his Director Sadik Heta tried to ignore all those problems as long as possible.

2021 we invested in a  national central pet registration and 2022 we printed 15'500 pet passports for the Veterinary Administration Kosovo as the government did not give enough funds for this project. So the program of microchipping and registering should start in Spring 2022. In beginning of 2023 still not all regions are allowed to chip! The procumen office of the Food & Veterinary Agency proved once more to work very slow.

For the first time in the history of the young state Kosovo the prosecution and judges were offered a seminary about animal maltreatment and prosecution. The seminary was organized by the Animal Rights Foundation Kosovo together with our help and the teaching of Swiss Animal Rights Foundation with the worldwide known experts Dr. Gieri Bolliger, Vanessa Gerritsen and Katerina Stoykova. 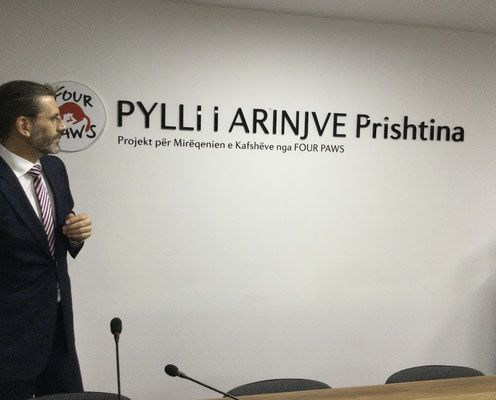 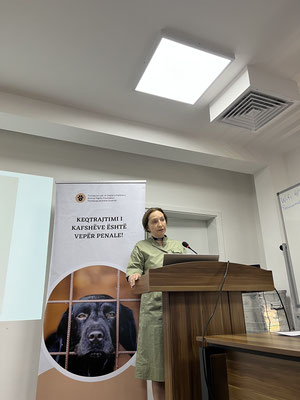 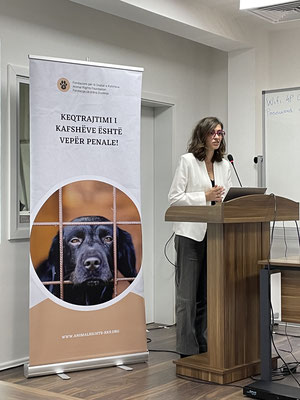 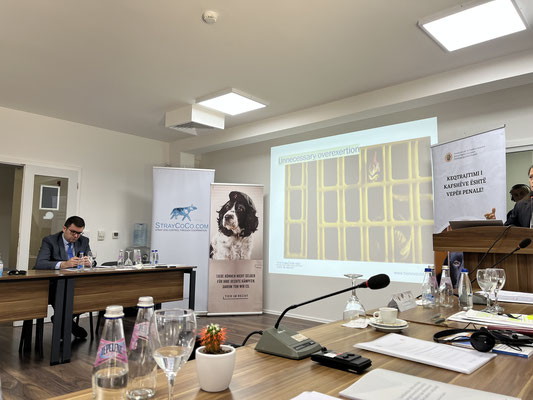 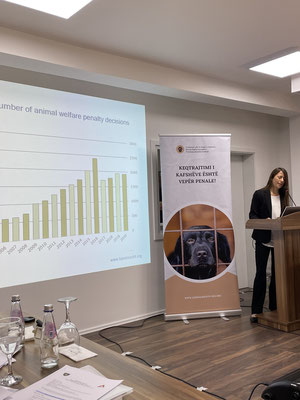 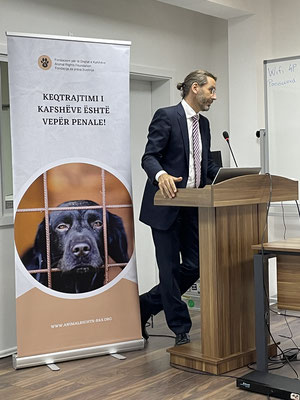 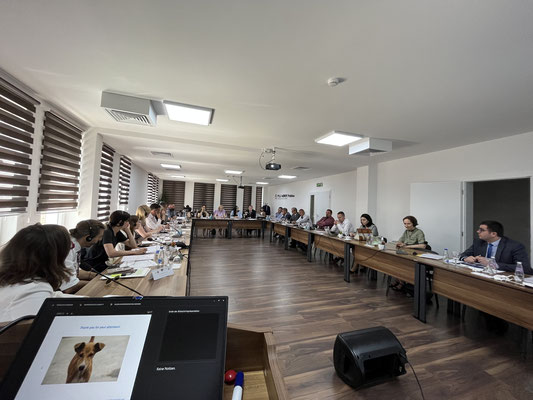 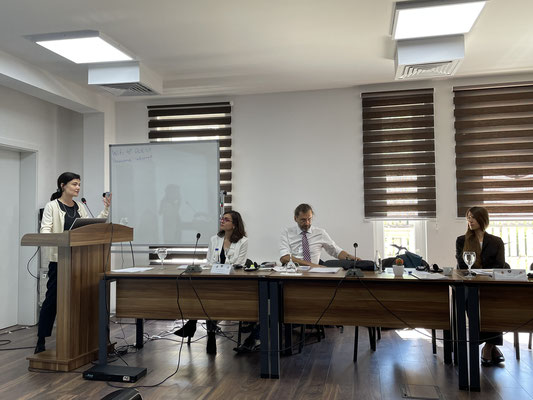 Oktober 2016: Concept prepared by StrayCoCo for the humane regulation of stray dog population in Kosovo;

23. Dezember 2016: Annual meeting of the Mayors of Kosovo and discussing stray dog problem. It looks like some of the Mayors are in favour of a CNVR program, if it can be financed. So we are waiting for the decision of the financial Department of Kosovo.

February 2017: A second regulation draft from Food & Veterinary Agency is sent to all veterinarians - giving them a very short time to react. Again the "Animal Welfare" Department proposes shelters in all Kosovo and killing of straydogs after 21 days. We protest!

March 2017: The consultation to the new draft is stopped, the draft is withdrawn.

9. March 2017: The president of StrayCoCo, Dr. Helen Wormser, is invited with the Ethologist and Veterinarian Michele Minunno (Bari/Italy) by the Kosovarian Veterinary Chamber to present CNVR strategies and treatment of stray dogs. The seminary is for veterinarians from Albania, Kosovo and Macedonia.

May 2017: Last Draft of a new regulation is approved and will be implemented. Kosovo will spend in the next 3 years 1.1 Mio. Euro for CNVR in Temporary Care Centers!

13th October 2017: Primeminister Ramush Haradinaj declares the treatment of stray dogs as an urgent state matter and commands the sterilisation, deworming, vaccinating and marking of all stray dogs in Kosovo.

27th December 2017: The Parliament of Kosovo decides to spend 1.3 Mio. Euro for this program in the next 3 years.

May 2018: The contracting of veterinary clinics in 7 regions of this country is done

28th May 2018: The CNVR program in the whole country starts - and is a disaster!

April 2019: New Animal protection law is implemented - but it is by far not complete.

Summer 2021: The law for controlled dog ownership is ready and in Force. StrayCoCo paid the central register, a work done by Animal Rights Foundation Kosovo, then we printed 15'500 pet passports. The program could start.

May 2022: All are waiting for the Food & Veterinary Agency which is slow beyond saying in contracting veterinarians to start the registration and chipping in whole Kosovo!

Nothing works without protest - and we got 120'000 signatures against dog mass killing in Kosovo: Here it is!